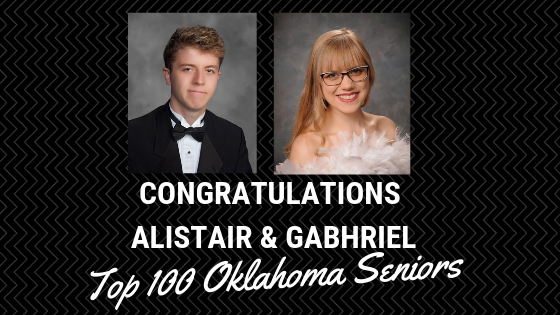 Among the 2019 Academic All-State Class are Eisenhower High’s Gabhriel Barber and MacArthur High’s Alistair Swierkosz. This is the 33rd to be selected by the Oklahoma Foundation for Excellence.  Since the award program’s inception in 1987, some 3,300 high school seniors from 325 school districts have been named All-State scholars.

Each of this year’s All-Staters will receive a $1,000 merit-based scholarship and a medallion. The All-Staters will be recognized at the foundation’s 33rd annual Academic Awards Banquet on Saturday, May 18, at the Renaissance Tulsa Convention Center.

David L. Boren, chairman and founder of the Oklahoma Foundation for Excellence, describes the selection of the scholars as “Oklahoma’s most rigorous academic competition.” To be nominated for Academic All-State, students must meet one of the following criteria: an American College Test (ACT) composite score of at least 30; a combined SAT evidence-based reading & writing and math score of at least 1370; or be selected as a semi-finalist for a National Merit, National Achievement or National Hispanic Scholarship.

Academic All-Staters are selected on the basis of academic achievement, extracurricular activities and community involvement, as well as an essay submitted by each nominee. The selection committee, which is chaired by retired Tulsa attorney Teresa B. Adwan, works independently of all other foundation activities. The committee members are a diverse group of business, education and civic leaders, as well as past Academic Awards Program honorees.

The Academic Awards Banquet is open to the public, with admission priced at $50. The awards ceremony will later be televised statewide by OETA, the Oklahoma Educational Television Authority. For more information, call the Oklahoma Foundation for Excellence office at (405) 236-0006 or visit its website at www.ofe.org.

Founded in 1985, the Oklahoma Foundation for Excellence is a statewide, nonprofit organization dedicated to recognizing and encouraging academic excellence in Oklahoma’s public schools. Through its Academic Awards Program, the foundation has provided more than $4.7 million in merit-based scholarships and awards to honor outstanding graduating seniors as Academic All-Staters and exceptional educators as Medal for Excellence winners. Other foundation programs include the Oklahoma School Foundations Network, Colonial Williamsburg Teacher Institute Fellowships, Teacher Grants for Professional Development, and the David and Molly Boren Mentoring Initiative.