This search form uses an instant search feature. As you type, search results will appear automatically below the search field. When you've entered you desired search terms use tab to navigate through the available results and hit enter to open the selected page or document.
MacArthur High School designated as a 2018 National School of Character
Communications Department
Thursday, June 07, 2018 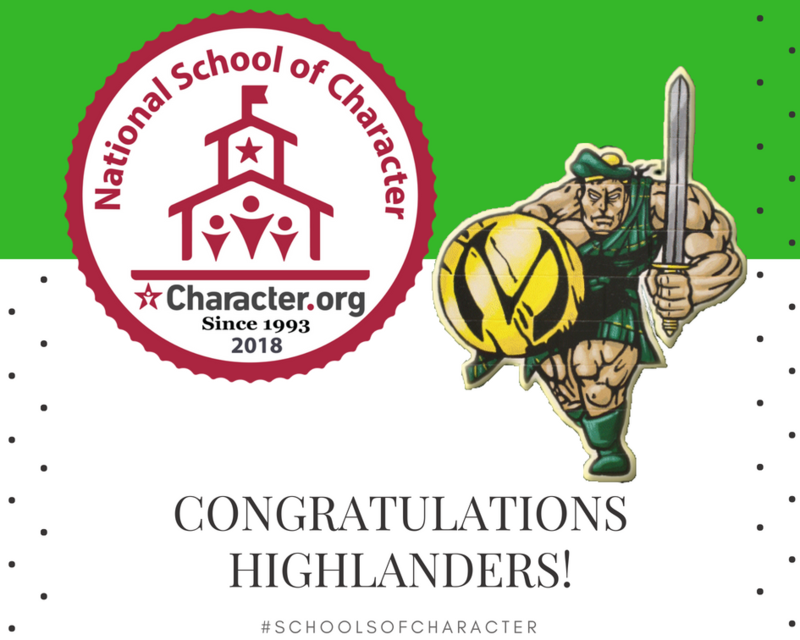 Lawton, OK – MacArthur High School (MHS) Highlanders ended the 2017-2018 school year on a high note with national recognition by Character.org – the nonprofit organization that validates character initiatives in schools and communities around the world. MHS received the official designation as a 2018 National School of Character on May 18, 2018.

“It is a tremendous honor for our school to be recognized as a National School of Character,” said Rod Elam, MHS principal. “This is an accomplishment in which everyone at MacArthur had a part and I am very proud of the entire faculty, staff, and student body for this recognition.”

After a two year long process, MHS is the second school within Lawton Public Schools to receive the distinction. Eisenhower High School was named a National School of Character in 2017. The process is comprehensive and extensive, but for assistant principal Laura Puccino it was “worth the efforts of all.”

“Many initiatives are student-led and student voice is prominent,” said Puccino. “Preparing career-bound citizens requires students who are prepared to voice their opinions and to make changes in their school and in their communities.”

The Highlanders focused on producing a more positive school climate and building on the school’s touchstone – On Me, Myself. Everything I Do – and core values - Motivation, Attitude, and Character (MAC).

Character education is an approach to school culture and climate improvement that supports the social, emotional and ethical development of students. It is the proactive and intentional effort by schools, districts, communities and states to help students develop important core ethical (recognizing what’s right) and performance (doing what’s right) values such as caring, honesty, diligence, fairness, fortitude, responsibility, grit, creativity, critical thinking and respect for self and others.

Since the inception of Character.org’s Schools of Character program in 1998, 547 schools and 35 districts have been designated as National Schools or Districts of Character, impacting more than 3 million people’s lives.