This search form uses an instant search feature. As you type, search results will appear automatically below the search field. When you've entered you desired search terms use tab to navigate through the available results and hit enter to open the selected page or document.
Blimp Mania Comes to Lawton
Lynn Cordes
Monday, October 23, 2017 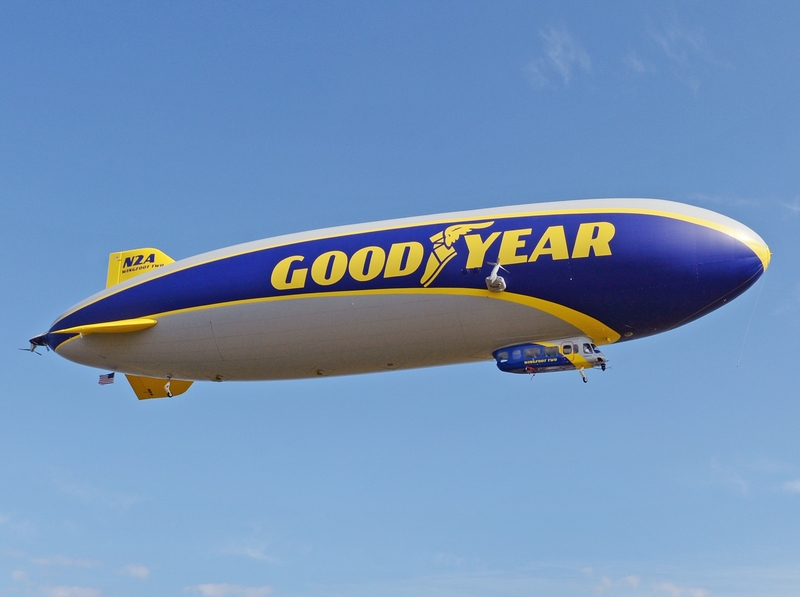 Dogs barked frantically and jump ropes folded listlessly to the ground as children squinted upward. Parents rushed outside, and teenagers briefly looked up from their smartphones as a giant shadow crept across Lawton last week. It hovered like a shy admirer, rising and falling over our great city . . . circling . . . looming. To call it Blimp Mania would have been an understatement.

In case you missed it, the newest Goodyear Blimp made a visit to Lawton last week as part of its cross-country, maiden voyage, and no visitor has ever cast a bigger shadow over the plains. Young ‘uns who spend all their time watching YouTubes and surfing the Interweb love The Blimp, and old folks like me who grew up watching Little Rascals (albeit in after-school reruns) love it, too! The Goodyear Blimp, therefore, may be one of the few remaining iconic symbols in our country able to connect people of all ages. In many ways, Wingship Two unified Lawton as it floated silently over our homes, schools, and churches.

At this point, you probably expect me to switch my message to education, how it is also one of the few remaining common grounds with the potential to bring us all together, whether Democrat or Rebublican, rich or poor . . . so on and so forth . . . but not this week. Our big balloon buddy brought more to Lawton-Fort Sill than a passing curiosity or a trite article in the Sunday paper. The Blimp reminded us what a community can accomplish when it moves with unity, vision, and purpose.

A generation ago, people had the vision to bring something special to Lawton-Fort Sill. I imagine some scoffed, others mocked, and a few blatantly opposed the idea. Nevertheless, a few dedicated souls moved forward, overcoming whatever differences, challenges, and fisticuffs that ensued during the process. Four decades later, Southwest Oklahoma has been blessed immeasurably. Indeed, all of Oklahoma. Without a doubt, something bigger than a curiosity floated over our fair city last week. Our bulbous friend surveyed a community transformed by a handful of visionaries. It witnessed the human dream that unfolded over the last forty years. It brooded as it hung there, as a hen broods over its chicks. Protective. Watchful. Hopeful. Eager to see coming generations merge from the tires.

I cannot help but wonder if passengers could see as far as Fort Sill, where a giant hangar still sits on Henry Post Army Airfield. The Army’s balloon programs were stationed here in 1917. Balloon technology quickly evolved into airships, dirigibles, and blimps. How fitting that one of the most modern airships in the world flew over the same skies first filled with crude balloons 100 years ago. And how fitting that the blimp floated into town 40 years after ground-breaking for the Lawton Plant in 1977. A lot has changed in Lawton over the last century, and a lot has changed in the last forty years, but the law of generational blessings remains intact. The generation that sows the seeds rarely reaps them, and the only way we can honor our predecessors is to invest in our progeny.

So the next time you see the Goodyear Blimp on television, remember how much this community has been blessed by people who dared to dream what Lawton could be instead of what it could not be. And if you do see the blimp again, look really close at the cockpit, because if rumors are true, you might just see a familiar face. Of course, Corporate dismisses it all as pure coincidence, but no one can deny that Wingship Two departed just as Plant Manager Brent Copeland retired. Who among us would not jump

at a second career as a blimp pilot? Either way, happy flying, Mr. Copeland, and safe journeys to Wingship Two.